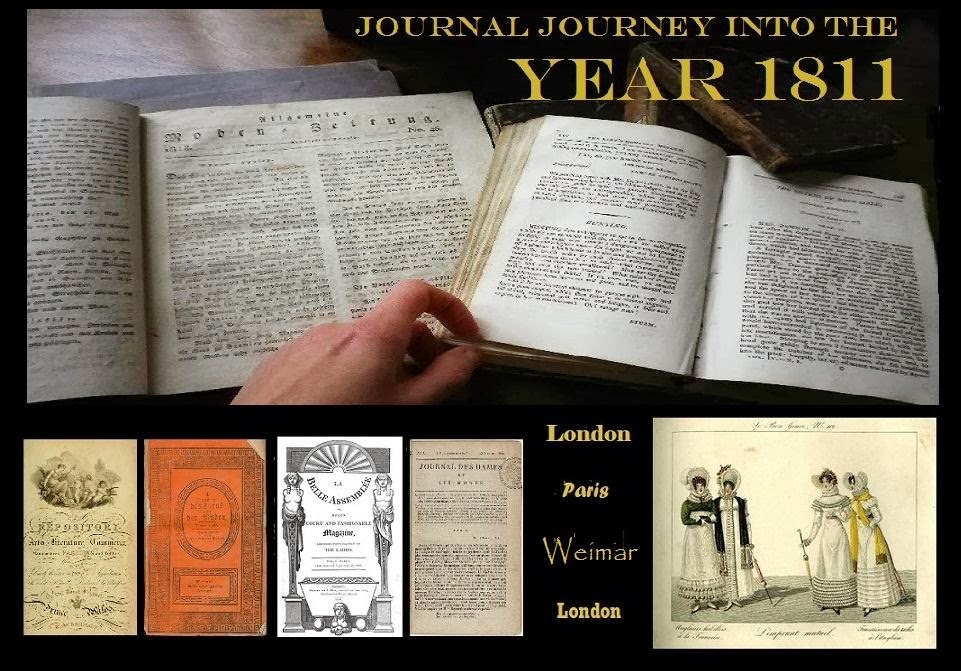 Velours is velvet. Satin is usually used for silk satin, but it could also be wool or cotton, though they would be rather described as croisé. Satin is a weave, it's not a description of the fibre.

Both Gravures belong to the foregoing issue N2, one of the issues what is not yet available digitally.
This week's gravures are 1115 & 1116, and are not explained in detail in this issue.

Gravure 1116
is a special treat: It's a "hair-how-to", described a bit further down by its inventor, Mr. Palette, who runs his business as a hairdresser at Rue Neuve-des-Petits-Champs.

A long very flexible plume or, even better, a bird of paradise adorns toques. A velvet toque is usually ponceau (Poppy-read). Nearly all satin toques are white. It's also a white satin ribbon what dressmakers pair with blonde lace (silk lace) to compose a ball dresses bodice. Some hairdressers employ flowers where, instead of batiste velvet took its place.
Speaking of velvet, it is useful to mention that some bandeau (ribbons) used for the hairdo with hair (Coëffure en cheveux) are sprinkled with steel-spangles.

Other interesting snippets
On January 15 the magasin de mode of Madame Amette currently located at 4,  Rue de l'Echelle moves to Rue Saint-Honoré no 338, between Place Vendôme and rue Neuve-des-Jacobins. (Comment by me: That's still a prime address for any fashion related enterprise today)

In our issue appearing on January 20, we shall include instructions on how to compose the hairdo shown on plate no 1116, of what Monsieur Palette, Hairdresser in rue Neuve-des-Petits-Champs is the composer.


Gravure 1117
Ball dress. Demonstrating the Pas du Shall.
Please note the fringe on her dress, what have been discussed in issue No 3. In regard of the Pas du Schall I have to refer you to my other Blog, Terpsichore, where this topic will be discussed in a short while, though I am still gathering more information about it.


Fashion
At all the milliners you will see pink, white, yellow, but don't let yourself be fooled by these sights. Yellow looses it's merit, white and pink are following. Ask for grey, take grey.

However a small demi-parure hat in white satin, what shows under it's bent rim a garland of flowers is not to be disdained. (Note: Parure is not just used for jewellery, most of you would combine "Parure" with "set of necklace, bracelets, brooch, earrings and tiara" - but it means nothing else than "finery" - so demi-parure is a semi-ornamented outfit. Might translate into "Casual Elegant, but not yet red-carpet" in modern terms)

For the rest, address yourself to your hairdressers, they are called upon daily. Not only do they know, but they also invent this winter's fashion. One of them will tell you, that a net shall hide a part of the hair-rosette (bun), therefore the look needs two bandeau of blue velvet. The other opts that straight hair, instead of a comb (tiara) a white flower garland ought to be placed.

But lets not forget that this space here is destined for the explanation of Plate 1116.

Hair-rosette made from strands, coral-bandeau
To arrange this up-do, M Palette, who invented it, knots the hair rather too high than too low. If they are 8 pouce long (1 pouce = approx 1 inch) he divides them into four equal parts, and crosses and knots these strands with a ribbon-like knot, what he secures with a pin.
He first takes as much hair with the pin what is required to secure it, and then hides the pin between the strands. The fingertips help him more here than his eyes to make this task easy, he reveals to us. It's the thumb what holds the loose strand, and only withdraws it when the pin takes it's place to hold the strand in place. The pin is directed by the finger, what retreats the more the pin dives into the knot of hair. He uses the same technique for each loose strand. The Chou may be composed of five, six, seven or eight parts, up to taste, though one egresses through the other.

The bandeau is made of coral seed-pearls, larger in the middle than at the edges.


Other interesting snippets
The man who wears his garrick in the streets, is either travelling merchant, or a dandy of the café Hardi. The one who wears it either up front or at the back of a carriage is nothing else than a footman or a coachman; but the man who has quite some problems getting into the carriage with his heavy and long garrick - now that's a distinguished gentleman. A man as he ought to be.
*************************

Some time ago, we've seen these cheap little pieces of jewellery displayed only on fob-chains of the young, but these past months we've also seen them around ladies necks. Once it's a small locket in the shape of a basque-drum, or a golden book representing tablets, a hieroglyph of fortune's wheel, decorated with pierre parlantes (where the first cipher of the names of the stones give a word) or - and this is the most extraordinary and most fashionable one - a small golden dagger, what would - without a doubt - give most of our ladies the resemblance of Lucretia, and stands as a symbol of their virtue. (Don't think Borgia here, it's the Roman story, of the virtuous Lucretia, who preferred to kill herself than to live in shame)
***********************

There were many outcries against the corset (the original text reads corset, see for yourself on page 26), and our ladies did not only abandon their corsets, but also their gowns, without neck-kerchief, they went nearly in their smock. Of this extreme in giving up garments, the ladies fell back into another.

Not only do they lace, and enclose themselves with busk and whalebone as in past times, but today's corsets are bigger (higher) and heavier than those earlier ones. A current corset doesn't only compress the stomach, the waist and the shoulders, but it surrounds and compresses the bust in a way, that a woman wrapped in such a way can barely move.

Oh, how these grand ladies are envied their brilliant finery! They can't laugh, or eat, not bend or turn. What do I say - they can barely breath. The slightest sight breaks the cord, and will bring their finery in disorder. Happy are the good ladies, the family mothers, who live quietly in their house, they receive not compliments of some toadies, but the love of their children, and they live, head, ésprit and body in liberty with a rested consciousness.
LE CENTYEUX

Read up what occupied readers in Germany & England in the same month:
Sabine is taking a closer look into the "Journal des Luxus und der Moden", Natalie tackles "La Belle Assemblée", Maggie devotes her time to "Ackermann's Repository". (I will link directly to their monthly entries once they are up)
Posted by Fiorina at 22:37