The Athen of the North - or some friends travelling to Weimar

Over a year ago, having an inspiring conversation with the charming Sabine the thought to meeting somewhere for real and having a good time with friends in a beautiful place came up. Very soon our destination was evident - our Sehnsuchtsort "Weimar".

Weimar. A name what (to anyone who is slightly hooked on the German Klassik) evokes the great names of "Schiller", "Wieland", "Goethe", "Herder", "Schopenhauer", "Anna Amalia" (including her library) and obviuously "Bertuch" (Journal des Luxus und der Moden. Do I need to say another word?) and creates a longing to spend some time in this beautiful city.

We ought not to forget that in the time of all these famous poets and thinkers and patron of arts, most of the inhabitants of Weimar lived in poverty. The average income for a valet was at about 40-60T. Schiller's House cost him 5000T (He had to take a loan, as his yearly income was "only" about 1500), while Goethe received his house at the Frauenplan as a gift by the Duke...
Here a wee footnote might be in order. Goethes house, as we see it today is mostly reconstructed, as it suffered a direct bomb hit in 1944, and it's made up as a museum (we can't see the kitchen anymore, we can only see the public face of the "universal genius", while at Schiller's house, the rooms were carefully reconstructed with support of his children (in other words, _very_ early on) and breathes an entirely different atmosphere)

But back to our plan. We've had some trouble finding a convenient date, and were torn for quite a while between June and September. Retrospectively we need to admit: if we would have planned for June, we would have been forced to cancel the whole idea, as the region suffered severe flood damage in May and June.
We did not set a "year" - on purpose we didn't. It should be an open and fun event, not involving sewing stress as in "I need to finish that". If people wanted to wear 1790ies, early 1800 or go for the bicentennial (1813) look - all would be welcome, as long as the garments would be garments, and not costumes.
Each and everyone would arrange his/her own travel and accommodation, but we would visit sights together. Lovely Mie took care of the carriages for Saturday, Sabine organised the tickets to the Anna Amalia Library, I took care of restaurant reservations.

But be it as it was: It was September. A glorious sunny and late summer/early autumn weekend. And the weekend was perfect (apart from some lucullian hiccups, more to that later)

Friday was our set date of arrival. After the long journey we were actually quite done for - Teddy was such a good puppy, and hold out so well travelling! (Yet my Sweetheart and I got a taste of what it would be like travelling with children, a puppy is somehow a fluffy baby with his own needs).
While we were unpacking, discovering the beautiful little welcome letter by Sabine, we've heard voices of a group walking down the streets. A run to the window, it were our friends on their way to the Indian Restaurant we've booked a lovely and scrumptious dinner at. (If you plan to go there - make sure both brothers are aware of the reservation to avoid confusion ;-) )

Saturday saw me taking out curlers, helping Susanne with her hair, getting Sweetheart into his things and then rushing across the market square to meet our waiting friends.
I talked on Friday with Anne and we found the solution to the "What shall I wear" question - 1790ies.
Anne Elizabeth is the third from the left on the picture below, wearing her beautiful open robe.


I settled for the Black Dress (see here for details), added Laure (a long sleeved muslin cross-over dress with leaf embroidery all around the hem) plus a diva-style hairdo.

The carriage ride organised by Mie took us around town, and our driver was telling us all sort of fun anecdotes (and also quite a lot of nonsense...) - what made for a happy time on board.

After the carriage ride, it was time for us to haul our heavy baskets filled with delicacies to the Ilm-Park.
Mr Reeves impersonating the gentleman on Agassé's Landing at Westminster, though contrary to his period example, he donned a waistcoat instead of just the shirt. 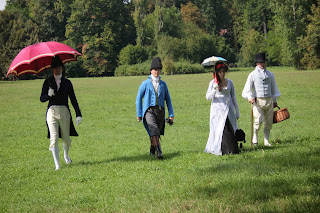 We've settled under a tree, just outside of Goethes Gartenhaus, and enjoyed Mie's rendering of "Der Türmer", the wonderful food and spirited conversation.

After the most urgent culinary needs were calmed, (evidently I took Laure off, I don't want to sully a dress I've spent months embroidering) some ventured to visit the garden, some visited the house, some the outbuildings (where was also the fresh water supply).

As I've started having a slight headache I sneaking up to the outbuilding, to drink plenty of water, what had the funny sight of a lady stumbling and weaving (I've been in hospital just a month ago, caused by an inner ear problem, and was still having some issues with balance) through the shrubbery in "partyfrock" waving a glass.... Well, it's Directoire, it's Partytime (at least for those who could afford to party, sadly the few, not the many)

To convince Susanne that she looks absolutely lovely we've had her walking (as she doesn't like posing for pictures) and voilà - she now has to believe us, she's a darling: 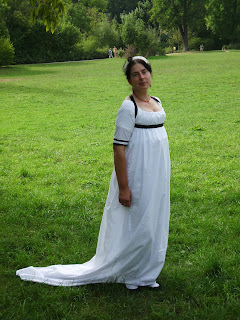 Goethes Garden and the gate invited to be used as a picture backdrop: Four graces (or three swans and one corbie...)

Two ladies in 1813, chatting about the merit of Botany and it's influence on fashion.
Black or White


The rest of the afternoon took us to the Bertuchhaus - a wonderful museum, the former house of Mr Bertuch (who published aforementioned Journal des Luxus und der Moden to promote his style and his wares), where we were allowed to examine up close and personal extant garments (provided one was wearing gloves), original fashion journals and accessories. We were allowed to take pictures, but we are not allowed to share them publicly, I apologise. Though I am working on a dress inspired by one of theirs, and I will enquire if I might publish some pictures, once I finish my dress).

The evening took us to the Restaurant Weisser Schwarn. Where when booking we were assured they would be able to cater to Vegans, Gluten-Intolerant and Vegetarians... It might have been Goethes' daily soak there, but honestly, it's not worth visiting today.
The prices are high, the portions are moderate to small, the food adequate, the service between friendly (the reservations staff and some of the waiters), mediocre and plain rude ("There was no gluten in the food" - "I am sorry, but my belly tells a different story.")
No link, no recommendation.

Sunday morning saw Susanne, Fabrice, Christian and I heading to Schiller's house (Mr Reeves preferred to sleep in). It's a wee gem. It truly is. Such a lovely home, where one can actually still hear the copper sizzling, children running through the house, floorboard creaking and live happening. (Fabrice took many pictures, I shall try to make a little post dedicated to them)

More to read you will find at: