Costume Vaudois - In the Age of Napoléon

It is going to be a long post, dear Readers, and as usual, I don't come straight to the point, but take a more winded lane to show you the landscape of my background thoughts, before we come to the final destination - the dress from the 1800s.

In Switzerland we have a rather fixed opinion on how a national costume should look like, how it's made, and who's wearing what. Most of these regulations date from the last 60 decades, usually adapted by close knitted group of people. More information on this you'll find here - on the web-page of the Schweizer Trachtenvereinigung.

Today's folk costume is a nostalgic take on an image we would like to present of Swiss History today, of a proud folk, living it's traditions and values.
Sadly, it couldn't be farther from reality than that. While many people who wear the modern Swiss National Costumes might hold up "Swiss Values" (Whatever these might be), historical accuracy and/or interest into the not so nice parts of history doesn't take part in it.


While I do like the variety of folk dress, I also would love to see it more improvised. Not "everyone's skirt ends 35cm off ground" or "only this and that fabric are admitted" or "your fichu should be knitted not netted or should have this brooche not that brooch". Yet also I understand the "Dirndl-Phobia"(the development of the regional costume into something generic and undistinguishable as blue-jeans) what hold these regulations up. (as an example: I wear my Costume Cantonal more fitted, and with a 100 year old hand woven linen shirt, an apron what has been washed repeatedly and showing it's been used as an apron. It gives it a sense of reality, but then I have to hear nearly each time I am wearing it "This is not according to regulation", yet no-one ever told me it looks bad, I am usually praised by more conservative people to hold up tradition and "it's nice to see young people wearing the Costume National)

To understand how we've ended up with todays National Costume (and the regulations according to each Canton and often according each area of the Canton), we need to look back: 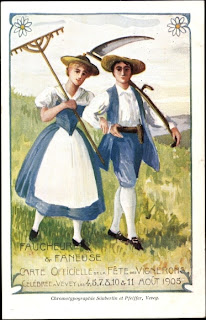 If we jump back 150 years, the outlook is bleak. In many areas textile mills replaced farms as the income source, and with the disappearance of the identity with the region, the costume started to die out, disappeared entirely, only to be revived again to create a new national identity and pride of one's country during the Big Wars. An example is the above cited Costume de Travail, what was fixed as the workdress in 1933 (following an earlier example of a blue workdress we find nearly all over the country, see above the poster from 1905), and evolved over the last decades, e.g. the blouse being now short and not a full shirt any longer) as many other costumes received their last re-design in either WW1 or just before WW2, to help forming the National identity of the Swiss to keep up moral against the raging war across the border up (the ACCV was founded in 1916, this is a retake of a rococo-outfit... (hard to believe, but it is) yet the idea is not new, re-inventing Swissness.

But - 150years back, the whole idea of Swissness started to appear - for tourists. For tourists who three generations earlier loved the pittoresque, and while not individual travellers any longer, but shipped in and catered to in large numbers, we invent and present The Alphorn, the Jodel, the Folky dance;  everything seen today as "Typical Swiss" - but is it "typical?"
No, it isn't. (e.g. the bagpipe was part of the Swiss musical landscape)


Let's turn the clock back 200 years, to the time of the French occupation, or even a bit earlier.
200 years ago, Switzerland wasn't a rich country. Money was in the hands of the few, not the many. Regional differences were predominant in peasant wear, and with the beginning age of tourism (as early on as the late 18th century) and the search of the pittoresque, many of these costumes were drawn and thus preserved for us today. These pictures didn't necessarily served as a "costume guide", they were more to show back home some Alpine curiosities. Prominent painters were Franz Niklaus Koenig and Gabriel Lory (Here's the free google book, you can find the reprint from 1980 quite cheaply online)
Evidently, in the cities fashion dripped down to the working class, as we can see very nicely here, with this servant from Neuchâtel, who might not differ so much from her counterparts in a German of French city. 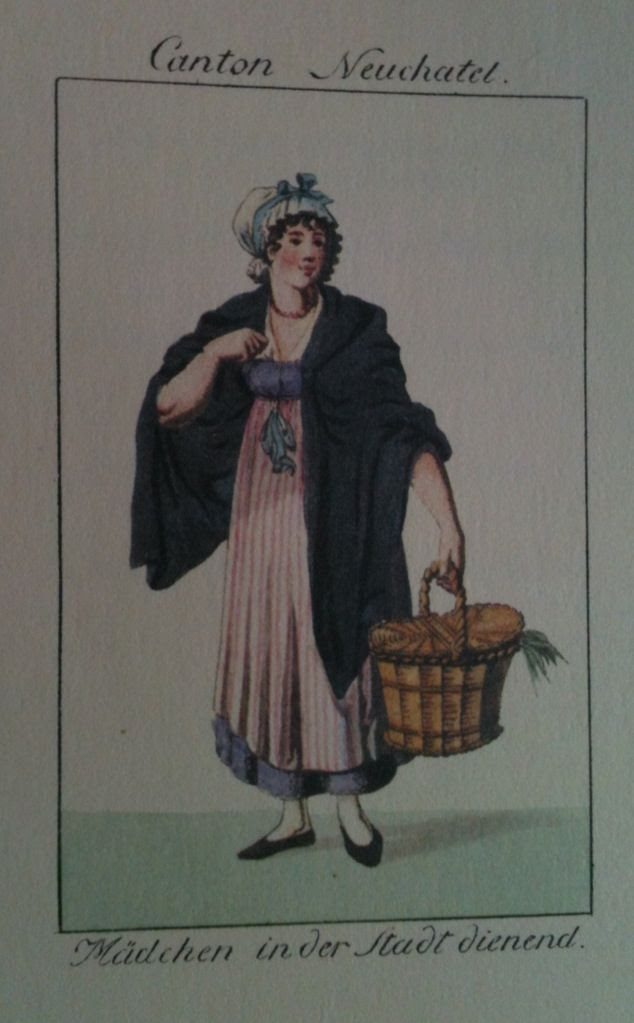 Back in this time, the average tourist was often somebody on the way to Italy, looking for wild beauty, for majestic mountains, for the bit, no-one saw before, the moment of eternity.
I admit, Caspar Friedrich is later, but he captures what apparently was one of the push-factors what spawned the Victorian mass-tourism (what again created today's Happy-Heidi-Land-Searchers-Tourism completely with non-Swiss-Cuckoo-clocks, plenty of Emmentaler cheese (it's a Swiss cheese, but there are many more varieties of cheese), Edelweiss, The Sound of Music (again, not Swiss) what usually ends a bit forlorn in the middle of a modern country, with next to no-one wearing a dress, everyone waving a smart-phone about and simply not fitting the picture).

Even Elisabeth Vigée-Lebrun was taken in. The painting "Unspunnenfest" has it's home at the Kunstmuseum Bern - it's grand in all it's details, not online available - thus I share a Lithography with you:

I mentioned Franz Niklaus Koenig and Gabriel Lory before. Franz Niklaus Koenig started as early as in 1801 to publish some of his prints, and met immediate success. The reasons were the same. The early tourists didn't wanted to see elegant ladies and gents (they've had them at home), but the pittoresque. The bit they would not see at home. The part what would make travel worth the pain and expense. Lory, Koenig and their contemporaries catered to this market. And thankfully, in their collection of images (there are several versions fluttering about), they also mention in German and French the nature of each attire, down to fabric and what they considered especially charming or interesting)

It was actually one of Koenig's prints what put the flea in my ear, to start digging for the Costume Vaudois in the age of Napoléon. And the more I started to dig, the more variety I encountered.

I start with the little picture (I apologise for the lousy quality, it's the result of me taking a picture of my 1980s reprint of the 1820 Koenig edition)
The editor tells us, that the young lady wears a cotton dress, an apron of the same fabric, and shoes resembling the city's fashion. (and he dislikes the hat - the chapeau cheminé or chapeau borne is a bit an oddity, and today only worn with the costume of the Montreux area)

Wolfgang Adam Toepffer shows us the same area a bit more different (and a tad more elegant), completely omitting the black bonnet Lory presented to us in the picture above.

Franz Niklaus Koenig shows us this young lady, from the area of Lausanne (the city in the background is Lausanne). Note the blue dress, the coloured fichu (as already shown in Toepffer's watercolour-painting from the met) and the hat - the same style as the two girls above and the dainty "city-like" shoes. This gravure was the one what really set me off, and made me go "I need such a dress."

I have seen an engraving of this watercolour by Wisard at the Ballenberg Open-Air museum, in one of the houses. Here we have again a similar yet different take on the whole ensemble, but with the added sun-protection of mittens. 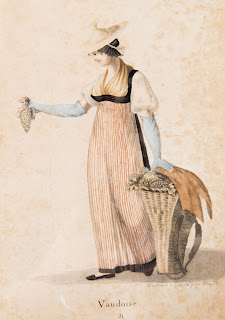 And yet another take, from the web-page Patrimoine - "living traditions" around 1810 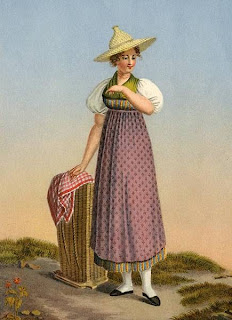 A very generous friend also shared this picture of her collection with me, after I told her that I am gathering pictures of the Costume Vaudois. Again the coloured fichu, a necklace (as with Toepffer), a blue dress, the wide sleeves, the flat shoes. By face of the girl, I think it's by Gabriel Lory, but I guess I'd never know. (if anybody does, please give me a heads-up!) Again the blue dress as shown by Koenig (but I guess we see the bodice being pinned to her underwear, the way it dips in) 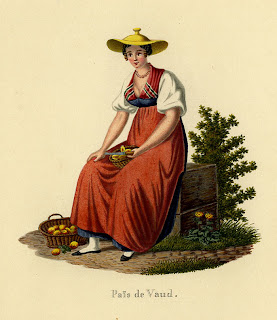 I've already started with a blue dress when C. shared her picture with me, and it just helped me to keep going on dark-blue, as I was tempted to go black as by Wisard's watercolour and the modern Montreux-Dress. I settled on a practical apron, of thick cotton (what can be boiled to remove stains) and a pink/orange fichu. The shirt is your average Empire-shirt, but I took the sleeves apart of one of my shirts and added a new fuller top to it.

Now, we have some jumpy thoughts on why and what; as this post is already rather long, I will share my take on the construction in the next one. (Pictures follow after August 1st, I am afraid)